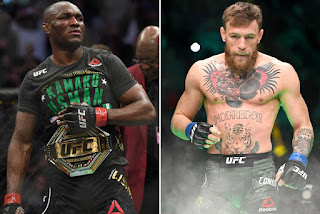 on social media after the Irish UFC fighter accused the Nigerian of ‘copying' his shots.

The Nigerian Nightmare made a fourth successful defence of his welterweight title on Saturday at UFC 261, after he dropped  Jorge Masvidal at 1 minute, 2 seconds of the second round of their fight in Jacksonville, Florida.

After the fight, McGregor accused Usman of ‘copying' his shots’' before promising to ‘give him a smack for it’ and move up to challenge at 170lbs.

To back up his claims, McGregor also posted a small clip from his fight against Dustin Poirier at UFC 257, a fight he lost via TKO.

Responding to McGregor’s comments, Usman warned he would be in for a very different night if he moves up in weight again to challenge him.

McGregor then responded by reminding Usman he was ringside the night he defeated ‘Cowboy’ Cerrrone at welterweight, also aiming a dig at ‘The Nigerian Nightmare’ for withdrawing from a meeting with Gilbert Burns last year due to an undisclosed injury.

Conor McGregor is currently training to face Dustin Poirier in a trilogy bout at UFC 264. Both fighters are currently tied 1-1, going into the third bout, with McGregor winning the first clash at UFC 178 and Porier getting his hands raised in the second at UFC 257.

The UFC 264 will take place on July 10 at the T-Mobile Arena in Las Vegas.