UPDATE - Governor Umahi imposes curfew in Ebonyi, says IPOB is not responsible for most attacks in the state 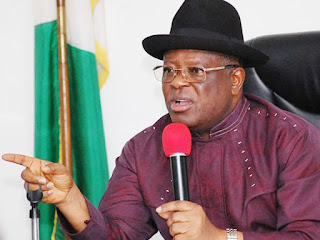 People of Biafra (IPOB) is not responsible for most of the attacks in Ebonyi state.

Umahi said this while addressing newsmen after a security council meeting held in Abakiliki. The Governor who alleged that hoodlums hide under the umbrella of IPOB to carry out their evil attacks, backed this up with a recent attack of a bank in Onueke in Ezza South Local Government Area of the state.

“We are aware that there are some killings over the weekend; a policeman was killed, two army men were killed and I think one civilian and their killers are pure bandits.

“They do these killings and put it in social media that they are members of IPOB or ESN.

“Without standing for either IPOB or ESN, but they continue to deny that they are not into violence but for me, criminality is criminality and I have directed security agencies to crack down on all criminal activities in the state.

“And for those who did the killings, the security agencies must bring them to book within 72 hours, they must do that."

The Governor also imposed curfew in the border axis of the state which he said would start on Wednesday from 8 pm to 6 am. He further directed natives doctors and traditional medicine dealers within seven days to register with the state government or face prosecution.

“There will be an executive order to this effect and anyone that is caught doing otherwise will be arrested and will be prosecuted."

Decrying an alleged increase in fake news in the state, Umahi stated that his administration would henceforth track down those behind such information and prosecute them.

“We agreed that there is rampant fake news in Ebonyi State.

“Like today, somebody posted that herdsmen are in Ebonyi and they are killing people and schools started closing down, students and pupils started running helter-skelter. Is that what we will continue to tolerate?