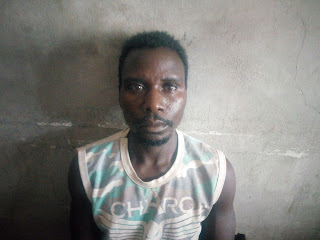 Adamawa for allegedly stabbing his uncle's son, Parambiu Alexander, 20, to death while fighting over N150.

The incident happened at Fotta community in Gombi Local Government Area of the state after the duo were paid for a job they had carried out.

The father of two, who is being quizzed at the Criminal Investigation Department (CID) of the state Police Command in Yola, said he and the deceased were engaged in a plaster job on April 14.

The duo shared the money they were paid after completing the job, however, he was supposed to give the deceased a balance of #150 but decided not to do so.

He explained that a woman heard them fighting over the balance and settled the matter by giving Parambiu the sum of N150.

Kelfari further narrated that after the woman left, the deceased insisted that the original N150 balance must be given to him as according to him, the money the woman gave him was a gift and not the balance.

He claimed that he went to the house of the deceased, met his mother and narrated everything to her, adding that she ''advised him to report the matter to the police.''

Kelfari further claimed that he was on his way out of the house when the deceased caught him and held his neck tightly. He claims in self defence, he drew out a knife from his waist and stabbed him on his chest.

Parambiu died on the way to a health center in Fotta while Kelfari was later arrested.

Spokesperson of the State Police Command, DSP Suleiman Yahaya Nguroje, who confirmed the incident, said that investigation is ongoing after which the suspect will be charged to court for prosecution.