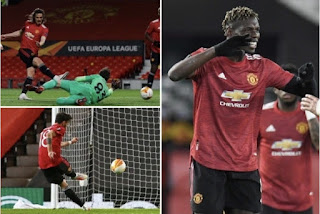 Manchester United came back from a first half capitulation against

Roma to record a massive 6-2 win in the first leg of the Europa League semi-final on Thursday night, April 29.

Edinson Cavani was simply superb during the game as he contributed two goals, two assists and won a penalty for the club which came back from 2-1 down in the first half to win this semi-final first leg tie 6-2. United were in control of the match from the start, with United starting Pogba Cavani and Rashford as a front three in front of Fernandes, Fred and McTominay.

In the first half AS Roma made  three substitutions including their goalkeeper due to injury.

Pogba executed a superb turn that left three Roma players in his wake and found Cavani whose touch just inside the area was perfect for Fernandes to lift over the advancing goalkeeper. Just only four minutes later Pogba undid his good work by handing Roma a penalty after handling the ball while trying to block a cross from Rick Karsdorp. Pogba then tried to retaliate with a long range shot that Pau Lopez saved, however the Roma goalkeeper dislocated his shoulder so had to be substituted. The team took the lead through Edin Dzeko after hitting the ball home from close range after a slick move from the visitors.

Then just three minutes after the break, Pogba found Cavani who exchanged passes with Fernandes before finishing superbly with a first time side-footed effort into the top right-hand corner. Aaron Wan Bissaka’s 64th minute cross shot was spilled by the goalkeeper and Cavani was at the right place to poach it home.

Cavani then caused a penalty after Smalling fouled him near the byline. Fernandes calmly placed the spot kick away and then on 75 minutes he provided the cross from Luke Shaw’s short corner for Pogba to head home and make it five goals for Manchester United. United were not done yet. Mason Greenwood came on to add number six after getting a great ball from Cavani with the outside of his boot to fire home.

United will now travel to Roma next week for the second leg.