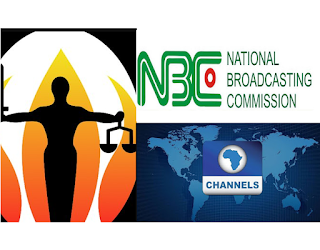 The suspension of Channels TV by NBC has been condemned

by many Nigerians and SERAP has threatened to sue the regulatory body.

The National Broadcasting Commission (NBC) reportedly suspended Channels TV over an interview the station held with the spokesperson of the proscribed Indigenous People of Biafra (IPOB).

Nigerians reacted, calling it an attack on independent media.

Reacting, the Socio-Economic Rights and Accountability Project (SERAP) threatened to sue NBC if it fails to reverse the "illegal" decision within the next 48 hours.

SERAP described the move by NBC as an affront on freedom of expression and the right of the media to function in its natural capacity.

SERAP’s Deputy Director, Kolawole Oluwadare, said in a statement on Monday, April 26, "This action by the government and NBC is yet another example of Nigerian authorities’ push to silence independent media and voices. The government and NBC lift the suspension and uphold the Nigerian Constitution 1999 (as amended) and international obligations to respect and protect freedom of expression and media freedom.

"This is a new low in Nigeria’s protection of freedom of expression, and the ability of independent media to function in the country. The suspension of Channels Television is detrimental to media freedom, and access to information, and the Federal Government and NBC must immediately reverse the decision."

SERAP called on President Muhammadu Buhari to caution NBC against ''intimidation of media houses and unchecked disrespect for Nigeria's constitution and other charters on human rights.''

"President Muhammadu Buhari should caution the NBC to stop intimidating and harassing independent media houses and to respect the Nigerian Constitution, and the country’s international human rights obligations, including under the International Covenant on Civil and Political Rights and the African Charter on Human and Peoples’ Rights," Mr Oluwadare said