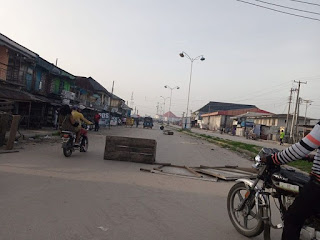 It was gathered that the two communities have been fighting over the ownership of the land on which the market is located for over seven years.

However, the latest clash started at about 3 pm on Thursday, April 29, when youths from the Otor-vwreko informed they will henceforth collect fee of N5, 000 from those trading along the walkway.

A source who pleaded anonymity told The Nation that the neighbouring Ekiugbo community challenged the announcement.

“While the argument between the two communities heightened, from nowhere, we started hearing gunshots ranging in the air and the whole market was in total disarray as many traders left their stores and goods scampering for safety," the source said.

"Not quite a few minutes later, information filtered out that about three persons from Otor-vwreko including the son of the oldest man were killed during the clash between the two communities.”

Another source said two of the deceased died on the spot while a woman that was shot in the front of her store died at the hospital where she was rushed for medical attention. He named the deceased as John Mark, Odibo and a yet-to-be identified person.

Acting spokesperson of the State Police Command, DSP Bright Edafe, who confirmed the incident, said it had to do with issues over who would sell tickets in the market.