17 seconds into his clash with Uriah Hall after throwing the first kick. As soon as the kick landed, Weidman’s leg was immediately injured and he fell down to the canvas in agonizing pain as medical personnel rushed to help him.

The bout was immediately waved off as Weidman, 36, fell to the mat in agony.

The American UFC star was soon carried out of the ring on a stretcher and transported to a local hospital.

He underwent surgery on Sunday and later posted an update on his Instagram.

“The pain is pretty bad,” Weidman said. “I think it’s like 3.30 in the morning. They’re trying to get me some more pain meds now.

“I know Uriah Hall was super classy and upset this happened to me, and I really appreciate that. It’s pretty brutal, but I’m gonna get through this. I think it’s gonna be eight weeks ‘til I can walk without crutches and stuff and drive and all that.

“As far as actual training, I don’t know. They said between six and 12 months, I’ll be good to go. I’m trying to find the blessing in disguise, the silver lining in this.

“Honestly, as soon as it happened and I hit the mat, saw what happened and the pain started hitting me, I was just trying to put my mind on something positive that’s gonna come out of this.

“This is not fun, I can’t believe it happened. I just appreciate all my family, my friends and fans.

“[And] the surgery was successful. They put a titanium rod through the tibia. They go through the knee and drill it through the tibia, make it straight and hard. My fibula was broken as well, but I guess when they put the tibia back together and my leg was straight, the fibula kind of matched back up to where it was broken.” 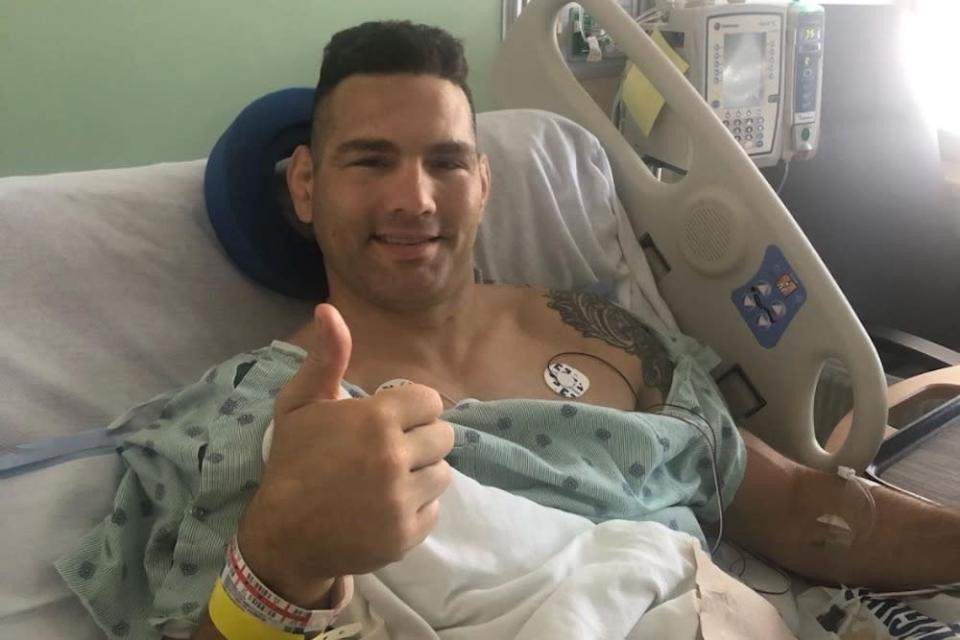