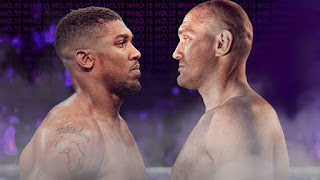 WBC heavyweight champion, Tyson Fury has vowed to quit in his

corner if his fight with Anthony Joshua goes past three rounds.

Tyson Fury and Joshua are still in negotiations for an undisputed title clash in the summer but Fury in an early morning rant in his Last Vegas Hotel room on April 29 said he is so confident of an early victory against Joshua.

Fury promised the fight will not make it into the fourth round, one way or another. Fury said: "While I'm on a rant, I may as well call out one more person; a big useless dosser, not a real fighting man, hype job, bodybuild, crossfit, big, ugly s***house.

"And that's Anthony Joshua. AJ, if you're out there let's make this fight happen you big dosser, you big s***house, bum dosser.

"I'm going to smash your face in too, and there's not one thing you can do about it. Prove me wrong sucker, prove me wrong.

Fury then added: "Just been thinking, another message for AJ; AJ, if you go past three rounds with me, I'll quit in the corner. "Because that's how confident I am of taking you cold out in the first two, three rounds. Out, like a light switch."

Joshua, 31, and Fury, 32, are signed to fight each other in a mouth watering multi-million dollar fight this summer but negotiations are not yet complete .