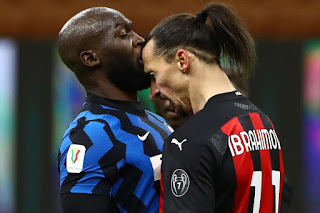 Romelu Lukaku has reignited his feud with Zlatan Ibrahimovic

A 1-1 draw between Atalanta and Sassuolo on Sunday secured the Serie A title for Inter with four games to spare for Antonio Conte's side, who are 13 points clear.

Recall Lukaku and Ibrahimovic, his former teammate at Manchester United, clashed in the Coppa Italia quarter-final back in February, confronting each other before both men received one-match bans.

Inter won that game against AC Milan 2-1 and now have the title too.

Taking to Twitter last night, Lukaku crowned himself " King of Milan" and appeared to taunt Ibrahimovic.

He wrote: 'The real god has crowned the king!'

'Now bow down. King of Milano,' the striker added, with a winking face and a crown emoji.

Lukaku has called 2020-21 the 'best season of my career', cracking in 21 goals in 33 Serie A games to drive Conte's men to the championship.