UPDATE - 'I would fight to the death for Conte!' - Romelu Lukaku hails Inter Milan boss after winning Serie A title 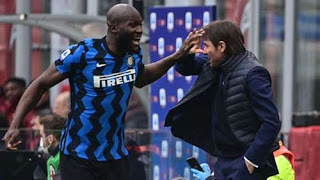 Inter Milan/Belgium star striker, Romelu Lukaku has claimed that he

would "fight to the death" for his coach, Antonio Conte while hailing the Inter boss following the team's 2020-21 Scudetto triumph.

Lukaku meanwhile has scored 21 goals in 33 league appearances, and says his coach should be credited for helping to take his game to the next level.

"I would fight to the death for him. I couldn't join him at Chelsea, but I always said I would play for him the day I left Manchester United," the Belgian striker told La Tribune.

“Conte told me very directly: ‘If you don’t work in training you won’t play, it’s essential that you know how to play with your back to goal'.

“It’s important to meet people who tell you the absolute truth to help you improve.”

Lukaku admitted to being relieved after winning only the second trophy of his career in the form of the Serie A title, insisting that he has always valued team silverware above individual records.

The 27-year-old still has three years left to run on his contract at Inter, and hopes to go on and achieve even greater success .

“Last year was good too, but this was the best of my career," Lukaku told Sky Italia after the Nerazzurri's title win.

"It’s wonderful and I hope to continue like this. I want to thank everyone, I am truly so happy.”