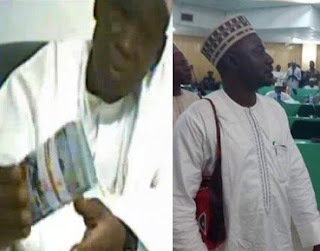 Abdullahi Ganduje's alleged "bribe video" has fled to the United Kingdom over alleged threat to his life.

Jaafar told Premium Times that he relocated with his family to the UK and will not be returning to the country ‘until the coast is clear.’

“I’ll be here until this regime can guarantee my safety and protect freedom of the press."

The publication reported that the publisher of Daily Nigerian fled to the UK barely a month after Governor Abdullahi Ganduje revealed that those behind a video of him allegedly collecting bribe which he described as "fake", would be brought to shame.

Speaking in BBC Hausa programme, ‘Afada Acika’, the Kano state Governor had claimed that the video was cloned.

Mr Jaafar was subsequently invited for questioning by the Nigerian Police Force after being accused of defamation. In the letter signed by A.A Elleman, the head of the Inspector General of Police Monitoring unit, Mr Ja’afar was accused of defaming the Inspector General of Police (IGP), though it did not state whether it is the present acting IGP Usman Alkali or his predecessor, Mohammed Adamu.

Speaking from his hideout then, Jaafar who maintained that “there was never a time he mentioned either the former or present IGP in any of his stories", accused the police of trying to arrest him upon arriving its office.

“Police are trying to file criminal charges against me for publishing Ganduje videos.

“That I defamed the character of IGP is a bait to arrest, detain and file criminal charges against me.

“I wrote nothing against the former and the current IGP."