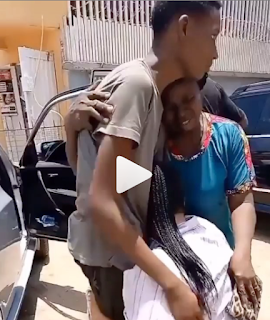 his family after being released by bandits.

Aaron's mother, Lauretta had confirmed his release on Tuesday May 4 but she refused to disclose how her son was released.

In a video making rounds online, Lauretta is seen kneeling on the floor as she hugged her son repeatedly after he regained his freedom.