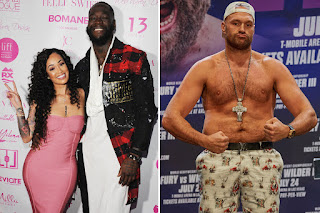 their trilogy bout was pushed back until October because of his positive Covid-19 test.

Recall Fury contracted Covid-19, following an outbreak in his camp, making their anticipated showdown on July 24 was disrupted. The fight has now been pushed back to October

Wilder's fiancee has now accused the British boxer of buying time, insisting that the fight should have gone ahead on the original date as planned.

'You've trained so hard, blood, sweat, and tears. And then for someone to have Covid, and Deontay's fight with torn biceps, broken fingers, burns on his arms, and he still fought,' Swift told TMZ.

'I just feel like with Covid and you have 16 days until the fight, he should still be able to fight and make it happen.

'I don't think that he's ready. I think he's buying time, and I just feel like he feels Deontay is at the best looking-wise.'

Reigning WBC heavyweight king Fury hasn't officially commented on his positive Covid-19 diagnosis, but a statement was released by his camp confirming the test.