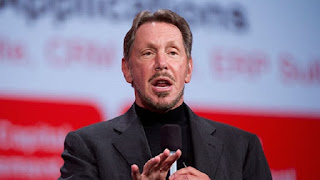 Billionaire businessman and CEO of Oracle, Larry Ellison has gained a sum of $5.4 billion in

five days, raising his net worth to $90.6 billion.

As at the 25th of May 2022, the billionaire was worth $85.2 billion according to the Bloomberg billionaire index. However, as of the time of writing this article, his net worth has seen a significant increase as he is now worth $90.6 billion.

On the other hand, his worth on a year-to-date basis has reduced significantly, dropping by $16.2 billion between January and May 2022.

The decline in his net worth is largely attributed to the huge selloffs recorded in the stocks of Oracle Corporation. The American multinational computer tech firm has recorded a 17.2% year-to-date decline in its share price, now selling at $72.78 despite starting the year at $87.9.

Similarly, the share price of Tesla, an American automotive and clean energy company, which Ellison also has exposure in, has also dipped by 36.69% year-to-date. It is worth noting that his net worth climbed by over $5 billion in the past 5 days as a result of the rally recorded in the stock market.

Oracle Corporation is an American multinational computer technology corporation headquartered in Austin, Texas. Notably, Oracle is the third-largest software company in the world by revenue and market capitalization.

Asides from Oracle Corporation, which is founded by the billionaire, he also owns more than 40% of the Austin, Texas-based company as well as a significant stake in Tesla, a sailing team, the Indian Wells tennis event and high valued real estate, such as  Hawaii’s Lanai island and very interestingly, a collection of 16th-century Samurai Armour and weaponry.

What Larry Ellison’s net worth can buy

According to the Bloomberg billionaire index profile of the billionaire businessman, his $90.6 billion dollar net worth can buy the following;