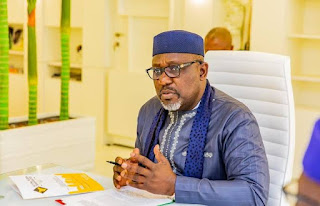 As reported by the Daily Trust, Mr Okorocha’s Ontario Street residence was surrounded by anti-graft body agents, as well as officers of the Nigeria Police Force.

Efforts to reach spokesperson for the EFCC, Wilson Uwujaren, has proved abortive as phone calls have been left unanswered.

In January, the anti-graft body filed criminal charges against Mr Okorocha, accusing him of allegedly conspiring with a member of the All Progressives Congress (APC) and five companies, to steal N2.9 billion public funds.

The EFCC alleged that offences were carried out between October 2014 and February 2016, as the parties moved funds from the Imo State Government House account and Imo State Joint Local Government Project account, and diverted same into accounts of private firms.

Mr Okorocha had in a visit to President Muhammadu Buhari, urged the president to prevail on the EFCC to obey court orders relating to his case.

“I used this opportunity to intimate the president on what is going on between me and the Economic and Financial Crimes Commission, the harassment, the intimidation I’m getting from the EFCC literally on a daily basis,” Mr Okorocha had told reporters after visiting Mr Buhari. “And to inform him that I have court judgements which stops the EFCC from harassing and intimidating me and all that. The EFCC has refused to obey the law.”

The agency alerted the Abuja division of the Federal High Court that Mr Okorocha had been evading the service of the 17-count fraud charge it preferred against him and the aforementioned others.