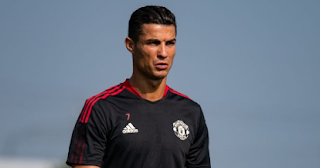 According to the Daily Mail, they are Christian Eriksen, Frenkie de Jong, Lisandro Martinez and Tyrell Malacia.

Eriksen will join as a free agent, while United are thrashing out the final details of a move for Barcelona’s De Jong.

Martinez, who plays for Ajax, also favours a move to Old Trafford over Arsenal and Malacia has undergone his medicals, as his transfer from Feyenoord draws near.

However, Erik ten Hag’s seeming movement in the summer market, has been eclipsed by more dramatic developments in the Cristiano Ronaldo saga.

Ronaldo failed to show up for pre-season training on Monday, with United insisting he was given compassionate leave for “family reasons”.

The 37-year-old is pushing for a move away from the Premier League club, to enable him feature in the Champions League next season.