{VIDEO} “If Your May Is Not Comfortable, She Can Move Out”- Larry Koldsweat Publicly Supports Yul Edochie 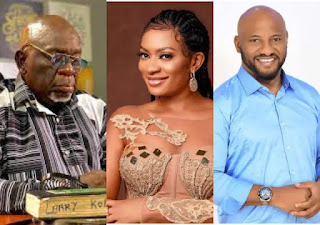 In a video which has gone viral on social media, veteran nollywood actor, Larry

The actor also referred to those who criticised his actions as “mad people”.

Larry Koldsweat shocked Netizens when he boldly said if Yul Edochie’s first wife, May Edochie is not pleased with his decisions, she can move out of the house.

He did this while showering praises on Yul Edochie during a movie shoot.

In the video shared via Yul’s Instagram page, the actor slammed the actress for being what he tagged “bad belle”.

According to him, the actress is an animal for once insulting Yul.

While stating that he dislike the actress, Larry Koldsweat, who seems unaware about her marital status, asked Anita Jospeh to focus on finding a husband.