{VIDEO} I make love with my son — Single mom spills 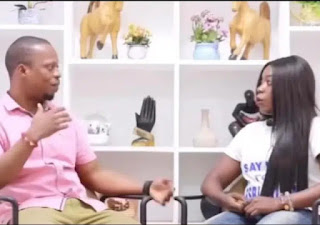 a series of complaints about missing her exes.

An interview covered by Ghana’s VIBES IN 5 witnessed a guest who openly declared having carnal knowledge with her son.

According to the lady, her son often offered himself to quench her sexual appetite after lamenting about missing her exes.

Adding to her point, she revealed that she eventually gave in to the desire by going down with her son once but never again even though he proposed to be available if she ever needs him.*

In other news Young man identified as Opeyemi Olufemi is apprehended by the police after stealing from the offering box of a church to the tune of N620K.

A video making rounds on social media captured the moment an individual was subdued after robbing a church of its offerings.

The individual had accessed and robbed a church whose name and location remain unknown at the time of this publication.

Opeyemi was caught with a bag that he stashed with money of all dominations amounting to a total of N620,115.