Showing posts from August, 2016
Show All

Tyga reunited with his old pal the repo man, who made off with the rapper's Ferrari at perhaps the most embarrassing time possible ... right in front of Kylie Jenner.
Post a Comment
Read more

'God Over Everything' album review Patoranking's

"Why I started My own Record Label" Lil kesh open up

''We have to make JAMB greater''-OLOYEDE 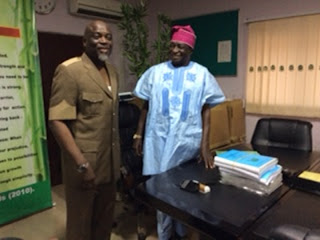 The newly appointed Registrar/Chief Executive of the Joint Admissions and Matriculation Board, Prof. Is-haq Oloyede, has said the task of improving on the work done by his predecessor was a collective one. Oloyede said this on Monday when he took over from Prof. Dibu Ojerinde, who he hailed for making JAMB great. He said, “Whether my period here is short, truncated or long, what is important is to do my bit and leave the stage better than we met it, just as my predecessors have done. Setting the stage is a collective responsibility and we all have to make this great Board even greater.” “The time is short and we need to hit the ground running, with the fervent hope that the same support you accorded my predecessors which was instrumental to their success, will be accorded me too. “Each of us was being patriotic to his constituency at that time. I sincerely believe that when you look back, you won’t have a cause to shake your head in contempt of what the JAMB you left has become.” The
Post a Comment
Read more 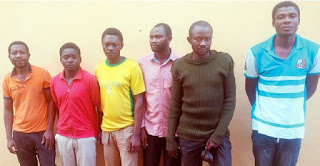 Two former police sergeants and three others has been paraded by the Lagos state police command for various criminal offence. The former officers identified as Sgt. Ochigbo Gabriel and Sgt. Francis Onuh were arrested alongside Emmanuel Audu, James Momoh and Sunday Onuh by men of the Inspector-General of Police Special Intelligence Response Team in the state. The ex-police officers, who were dismissed from the force for different offences in 2009 over their involvement in various illegal activities in Warri, Delta State, decided to take up the tools of armed robbery. Audu, 33, said he joined the Nigeria Police in 2003. The 33-year-old Audu, who joined the police in 2003, and was dismissed as a constable in 2009, told journalists that shortly after he lost his job, he relocated to Lagos and became a dispatch rider until December last year when he was looking for a job and met Peter Owocho, another member of the gang who introduced him to the gang. Audu disclosed that he had particip
Post a Comment
Read more
More posts