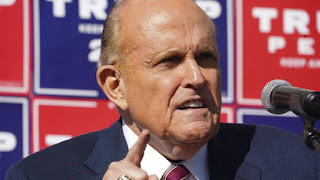 lawyer, Rudy Giuliani, was raided by the FBI on Wednesday morning, April 28, in connection with the bureau's ongoing investigation into his dealings in Ukraine.

Guiliani has been under investigation for more than two years in connection with the criminal case against Lev Parnas and three other associates.

Parnas and another Giuliani associate, Igor Fruman, were accused of a straw donor scheme.

Apart from the donor scheme, they also met with Giuliani and introduced him to Ukrainian officials, around the same time with Trump’s first impeachment where he was accused of pressuring Ukranaian president Zelensky to carry out investigations against then-Democratic presidential candidate Joe Biden in 2019.

Giuliani, while acting as Trump’s attorney, is accused of orchestrating a pressure campaign on Ukrainian officials to dig up dirt on Joe Biden in 2019.

Trump's effort to dig up dirt on Biiden sparked the impeachment inquiry.

The FBI believes Giuliani’s efforts in Ukraine may have violated foreign lobbying laws.

The raid as reported by The New York Times, means that the investigation into Giuliani is entering a new phase as prosecutors believe they have a strong case against the former New York Mayor.

Giuliani, a lawyer for former President Donald Trump, is entitled to certain attorney-client privilege protections that can only be overcome with significant evidence of a crime, so for the FBI to search his house it seems the bureau have strong leads.

Prosecutors also believe Parnas also invoked Giuliani’s name and his relationship with Giulani to seal the deal with investors in an insurance startup business, that Parnas later scammed.

According to the NY Times report, the feds seized Giuliani’s electronic devices.

“In SDNY, under any administration, you do not get search warrants easily and you definitely do not get it easily when there’s potential attorney-client privilege involved, especially this high profile,” said Westchester County District Attorney Mimi Rocah, who previously served as a federal prosecutor.

“It’s an extremely high burden required to show evidence of a crime in that location and that it’s not connected to legitimate legal work,” she added.

“I would not be surprised if charges and an arrest followed.”

Giuliani is the second personal lawyer for Trump to be raided by the FBI.