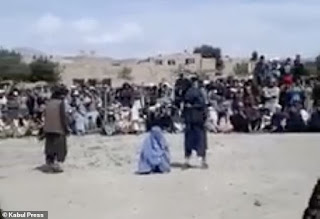 she was reportedly caught speaking to a man on the phone.

Footage shared online shows the woman being led into a ground where the punishment was handed down by three tribal elders in front of dozens of male spectators.

While being lashed, the woman was heard pleading for mercy.

'I repent, it's my fault, I messed up,' the woman cries as she writhes under her burqa.

The footage emerged on Facebook on April 13 but is thought to date from late last year in the village of Haftgola, outside Herat in Afghanistan's northwest, according to France 24.

The young man who spoke to her on the phone was also arrested and was being held in a prison cell at the time the footage was recorded, France 24 reported.

Atefa Ghafouri, a women's rights activist in Herat, told France 24: 'All of the men who attended the whipping were ordinary citizens, just people who live in the area. Lots of Afghans, especially those in rural regions, support these tribunals. In many parts of Afghanistan, the government has zero presence.

'There is no court where you can go and file a complaint. And even when there is some kind of court, the judicial proceedings are long and expensive, because you have to pay bribes so that someone actually works on your file

'So, unfortunately, the only alternative is a Taliban court, which also happens to be rapid and free. People turn to these tribunals and find solutions for their conflicts and that builds legitimacy. The Taliban then impose their rules. The first victims of this system are women.'