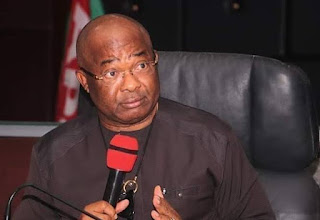 Governor Hope Uzodinma of Imo State has given out six hundred bags of rice, cows and

other items to the Mus­lim community in the state for them to have a mouth-wa­tering sallah celebration.

Leadership of the Muslim community in the state took delivery of the 600 bags of 50kg of rice and five big cows on Monday.

The governor’s gift was presented to the Muslim community by the Secretary to the State Government, Chief Comas Iwu, in a brief ceremony at the Government House in Owerri.

Iwu, who commended the cordial relationship between the Muslims and non-Mus­lims in Imo State, said as a result of their role in helping to maintain peace and tran­quility in the state, Governor Uzodinma always enjoys frat­ernizing with them, more so during an occasion like the Sallah.

Iwu said in order to assist them join their brothers and sisters all over the world to celebrate the feast of sacri­fice, the governor was pleased to donate the 600 bags of 50Kg rice and five cows, noting that “it is just a show of love that Governor Uzodinma has for Muslim faithful in Imo State.”

He added: “Since inception of the Shared Prosperity Government in Imo State, the governor has demonstrated a lot of love and magnanimity to the Muslim community.

The SSG advised them to continue in their peace­ful disposition and sincere practice of their religion as it proffers peace, harmonious relationship and co-existence of all human beings created by God.

Receiving the gifts, head of the Muslim community in the state, Seriki Hassan Aw­wal Baba Sule, acknowledged the cordial relationship be­tween the government and the people of Imo with Mus­lim faithful in the state.