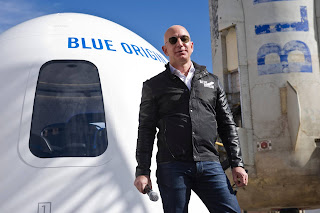 The world's richest man, Jeff Bezos has taken the battle for space exploration

between his rocket company Blue Origin and Elon Musk's SpaceX to another level as he offered the National Aeronautics and Space Administration (NASA) up to $2 billion to get space exploration contract.In an open letter, the Amazon founder and chairman appealed to NASA Administrator Bill Nelson, offering to cover billions of dollars in the US space agency's costs with hopes that his Space company, Blue Origin can be reconsidered for a contract to build the space vehicle that will land the next astronauts on the moon.

NASA originally intended to have at least two private-sector companies compete to build the spacecraft that will ferry astronauts to the lunar surface for the Artemis moon landing missions — a project called the Human Landing System (HLS). NASA expects to land the first woman and the next man on moon's south pole in 2024 . Humans last explored the lunar surface during the final Apollo mission, Apollo 17, in 1972.However, in April, NASA made the surprise announcement that it would move forward with Elon Musk's SpaceX as the sole contractor for the project, citing costs as a primary reason.

Bezos who went on a space flight last week in his own space vehicle has now come out to publicly urge NASA to reonsider it's position and consider his company."Blue Origin will bridge the HLS budgetary funding shortfall by waiving all payments in the current and next two government fiscal years up to $2 billion to get the program back on track right now," he wrote.

"This offer is not a deferral, but is an outright and permanent waiver of those payments. This offer provides time for government appropriation actions to catch up. "Bezos repeatedly emphasized the need for NASA to promote healthy competition as the agency works toward its return to the moon."Without competition, a short time into the contract, NASA will find itself with limited options as it attempts to negotiate missed deadlines, design changes, and cost overruns," he wrote."Without competition, NASA's short-term and long-term lunar ambitions will be delayed, will ultimately cost more, and won't serve the national interest."