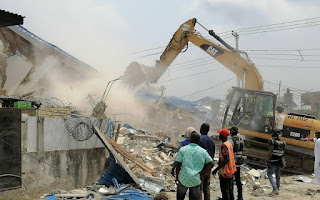 demolished a 3-floor vicarage belonging to Christ Anglican Church at 60/64 Glover Street, Ebute-Metta due to its distressed state as well as to avert the danger that the building presently poses to its occupants and neighbours.

LASBCA insisted on bringing down the distressed structure which had been taken over by stagnant water, to avert imminent danger, although the leadership of the church had claimed that it had already commenced the process of removing the building, having sought permission to do so.

Confirming the development, the General Manager of LASBCA, Arc. Gbolahan Oki, who spoke through the Director of Enforcement of the Agency, Mr. Olusoji Olaopa, noted that several other buildings within Ebute-Metta and its environs have been identified and marked for demolition during the ongoing exercise being carried out in phases.