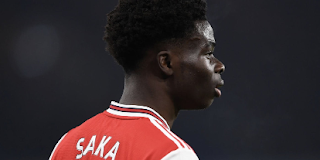 Manchester City have stepped up their interest in Arsenal forward, Bukayo Saka, according

to the Daily Mail.

The Premier League champions are now closely monitoring Saka’s situation at the Emirates, as he heads into the final two years of his contract.

Along with Liverpool, City have earmarked the 20-year-old as a future target.

And though any move this summer is currently considered unlikely, the Etihad club has begun showing increased interest in Saka.

Saka’s current deal includes an option of one more year which will take his commitment to Arsenal up to 2024 should the Gunners, as expected, activate it.

Securing the England international on a new and improved contract that reflects his rise in status for club and country was one of Arsenal’s priorities this summer.