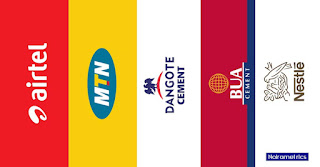 The Nigerian stock market rallied in the month of May 2022, attributed to positive investor sentiment in

Also, the market capitalization closed the month at N28.6 trillion, indicating a N1.6 trillion increase in the month compared to N26.78 trillion as of the end of the previous month.

According to analysis carried out by Nairalytics – the research arm of Nairametrics, Airtel Africa, Dangote Cement, and MTN Nigeria led the list of companies on the Nigeria stock market with the highest market valuation. Airtel maintained its top spot, with a market capitalization of N6.64 trillion, accounting for about 23.2% of the total equities market capitalization. The company’s valuation has gained N3.05 trillion year-to-date on the back of an impressive first-quarter financial performance.

Cement giant and most capitalized manufacturing company, Dangote Cement followed with a valuation of N4.72 trillion. The company’s market capitalization dropped by 5.3% in the review month from N4.98 trillion recorded the previous month.

MTN Nigeria however, with a N315.49 billion gain in May, retained its third position in May 2022 with a market valuation of N4.68 trillion. BUA Cement, Nestle, and BUA Foods also followed with valuations at N2.51 trillion, N1.11 trillion, and N1.04 trillion respectively. The six companies make up the list known as the SWOOT (Stocks Worth Over One Trillion).