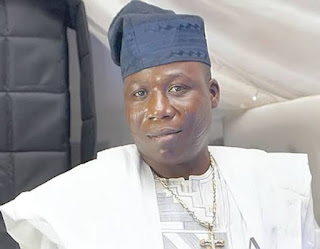 to the gruesome killings of worshippers in a church in Owo, Ondo State.

Igboho urged Yorubas to unite while calling on South-west leaders to support him in his fight.

“MY FATHERS AND MOTHERS, CAN YOU SEE THAT I HAVE BEEN VINDICATED? I WAS NOT IN A BATTLE WITH ANY GOVERNOR OR SENATOR. BUT WHAT I ENVISAGED, YOU DIDN’T SEE IT. NOW, CAN YOU ALL SEE? PEOPLE WERE SAYING I WANTED TO CAUSE TROUBLE BUT YOU CAN NOW SEE. GOD HAS BLESSED ME THE WAY HE WOULD BLESS ANY MAN. ON THIS MATTER, IF WE SAY IT DOES NOT CONCERN US, THAT MIGHT BE UNTIL IT AFFECTS SOMEONE CLOSE TO US.”

“WELL, THE SITUATION CAN STILL BE REDEEMED. I WANT YORUBA PEOPLE TO BE UNITED BEFORE IT IS TOO LATE. I WANT SOUTH-WEST LEADERS TO SUPPORT ME AND OTHER COURAGEOUS YORUBA SONS AND DAUGHTERS SO THAT WE CAN GUARD AGAINST THESE WICKED ACTS. IF I HAVE OFFENDED ANYONE, I ASK FOR PARDON, PLEASE,” HE ADDED.

Sunday Igboho is unable to leave Benin Republic following his arrest last year while he was about to travel to Germany with his wife Ropo. His wife was released shortly after the arrest.

The agitator gained prominence last year when he began spearheading the fight against herders who were allegedly perpetrating violence in the south-west.

Sunday Igboho fled Nigeria after operatives of the Department of State Service (DSS) raided his house in Ibadan, Oyo State capital on July 1, 2021.

He was declared wanted for allegedly stockpiling arms and ammunition among other allegations.