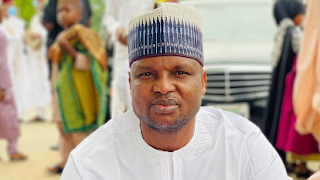 The suspended Deputy Commissioner of Police, Abba Kyari, has been reportedly moved out of Kuje Medium Security Custodial Centre in the Federal Capital Territory (FCT).

Naija News learned that Kyari was moved out of the prisons hours after terrorists invaded the facility late on Tuesday to free some of their members.

It was also gathered that most of the violent criminals and terrorists in the facility were also released by the terrorists into the FCT.

However, many high-profile inmates were said to have stayed back during the Tuesday night attack, which lasted about three hours.

In a chat with Peoples Gazette, a correctional officer, who wanted to remain anonymous, said inmates like Abba Kyari, Farouk Lawan and other prominent detainees are still in the facility.

Kyari, who was remanded in the prison earlier this year, is standing trial for allegedly dealing in cocaine alongside four members of his former police unit and two other persons arrested at the Akanu Ibiam International Airport in Enugu.

Meanwhile, the Nigerian Correctional Service has confirmed the attack on its facility in the Kuje area council of the Federal Capital Territory.

The spokesman to the service, Umar Abubakar while reacting to the incident said an armed squad of the service in collaboration with other security agencies responded to the attack.

Abubakar in a statement released in the early hours of Wednesday said calm had been returned to the area.