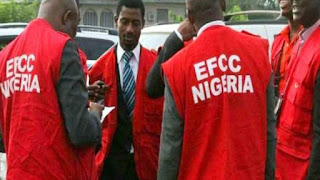 The suspects, including a convicted internet fraudster, Okhiria Alex Chibueze, according to EFCC, were arrested on Thursday for alleged internet-related fraud.

The Commission in a statement stressed that the suspects were nabbed in a sting operation at Soka area of Ibadan following intelligence reports on their alleged cyber-fraud activities.

It stated that eight exotic cars, several mobile phones, laptops, expensive wrist-watches among other items were recovered from the suspects.