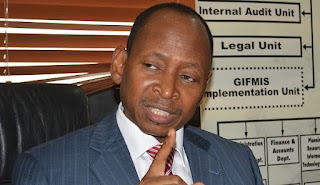 Accountant-General of the Federation, Ahmed Idris and three other persons at the Federal Capital Territory (FCT) High Court.

The EFCC alleged that Idris had between February and December 2021 accepted N15.1 billion gratification from Olusegun Akindele while still serving as the AGF.

The commission said the money which was converted to dollars by Akindele was to accelerate the payment of 13 percent derivation to the nine oil-producing states through the office of the AGF.

The offence, according to EFCC, contravened Section 155 of the Penal Code Act Cap 532 Laws of the Federation of Nigeria 1990 and punishable under the same Section.

In his ruling, Justice Adeyemi Ajayi ordered that the defendants be remanded at the Kuje correctional centre in Abuja.

He also adjourned hearing on the bail applications filed by the defendants till July 27.