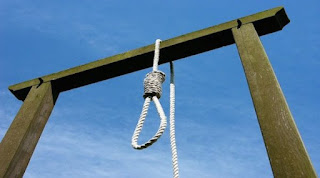 An Ado-Ekiti High Court has sentenced a 49-year-old man, Ademola Akinola, to death by

hanging for killing Tunde, his older brother during process of robbing him of his motorcycle.

Akinola was arraigned before Justice Lekan Ogunmoye in December 2020 for armed robbery and murder.

The police said Akinola on Nov. 19, 2019 at Usin Ekiti in Ikole Local Government Area of Ekiti, robbed Tunde, his older brother of his Bajaj Motorcycle with Registration number ADK 011 VC, while armed with offensive weapon, to wit; gun.

According to the prosecution, the offence contravenes the provisions of sections 402 (2) and 319(1) of Criminal Code Law, Cap C16, Laws of Ekiti State of Nigeria, 2012.

The defendant spoke in his own defence through his counsel Olarewaju Oluwasola and called no witness.

“In all, the prosecution has succeeded in convincing the court to resolve the sole issue for determination in its favour and I so do.

The defendant is accordingly convicted as charged for the offence of armed robbery and murder.

“The defendant is sentenced to death by hanging in count one (Armed Robbery) and count two (Murder) until he be dead. May the Lord have mercy on your soul.