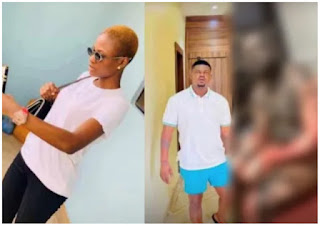 discovering another woman has a child for him has caused a stir on social media with a lot of people totally shocked by the report.

A Twitter user took to his timeline to share photos and screenshots giving details of how the situation came to be.

According what he updated his followers, the young man who got burnt had just returned from Cairo so as to be there for his girlfriend’s birthday.

However, his girlfriend later discovered that another woman has birthed a child for him which got her scorned and lay a threat to his life. A screenshot of her WhatsApp status she made shows her threatening that people would weep over him before daybreak.