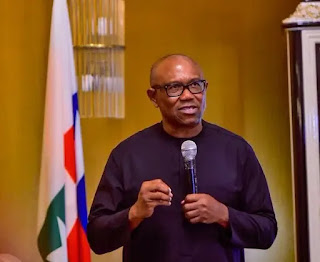 The former Anambra Governor and 2023 presidential candidate on the platform of the Labour party, Peter Obi was mobbed by supporters at the arrival wing of the Murtala Mohammed Airport in Lagos.

Arriving at the airport alone,  Peter Obi swamped by supporters, wanting to chat and take photos with him.

Peter Obi, in the video that surfaced online, was mobbed by admirers, well wishers and supporters.

Meanwhile, Peter Obi, recently paid a visit to Benue State Governor, Samuel Ortom shortly after the PDP stalwart returned from his visit to the United States.

The former governor visited Ortom at his private residence in Abuja on Wednesday, July 20th, 2022.

Speaking during the visit, Ortom urged presidential candidates of the various political parties for next year’s general election to put Nigeria first above personal interests.

He said Nigerians were in dire need of people with “commitment and competence” that would fix the leadership crisis that has plunged the country into outright chaos.