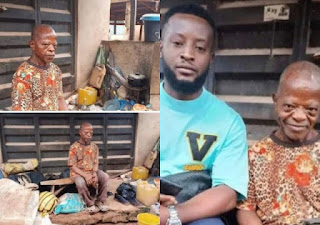 The news making rounds is that the actor who has starred in several Nollywood movies doesn’t have a home of his own.

The veteran was seen in pictures going viral sitting in a shabbily environment.

A well meaning Nigerian had shared photos of him, he had announced that the actor currently had no home and a place to stay.

The actor was seen having his lunch with him.

Taking to comment section, Nigerians lambasted the actors guild of Nigeria and question their purpose of existence.

joansportbliss : Dem no dey ever help themselves ooh. Only show off. When something happens to him now. U will see emergency love from no where. Mtchewwwwww yet they have a president n excos

p_swagz45 : Some producers and directors go use you and your future join. Them no send you o

frankisaiah85 : Chaiii….is he not a member of the @actorsguildofnigeria and even if he’s not, he has contributed to some of the great Nollywood movies of those days. Let’s help him bikonu. This is unbelievable.

jennifer.anozie.7 : I have even see dis man picking things from dustbin at Okpara avenue Enugu