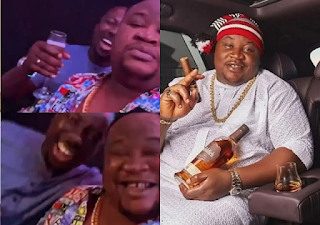 Many felt Cubana Chief Priest had once again parted ways with Obi as the former failed to promote Obi’s new business, Odogwu Bitters.

However, proving that their bond is still strong, Chief Priest shared a video of them together as they party at what appears to be a club.

He went on to describe Obi Cubana as his overall boss.

His fans took to the comment section to praise them for maintaining the bond.