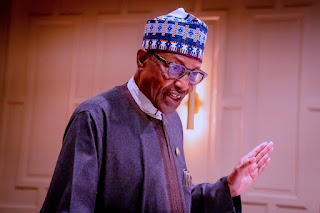 President Muhammadu Buhari has said he is not leaving anything for his children to inherit, as

his greatest legacy is to ensure that they are properly educated.

Garba Shehu, Senior Special Assistant to the President on Media and Publicity, in a statement, said Buhari spoke on Wednesday, during a visit to the palace of Umar Faruk, Emir of Daura, in Katsina state, for the Sallah homage.

According to the statement, the President said his focus has always been on training his children to be relevant wherever they find themselves, adding that he told his female children that they can only get married after getting a first degree.

Going memory lane, Buhari said that after his release from jail in December 1988, he told his children that their net worth is what is in the head, not what one has acquired in life.

He, therefore, charged the youth to seek education, not for unavailable government jobs, but to arm themselves with skills and abilily to fight poverty and meet the needs of the 21st Century.

The President said more time should be given to coaching future leaders with basic knowledge of moral values, as the fast-changing world, driven by new technology, would be more competitive and demanding.

He implored parents to inculcate the right values in children, including deep fear of God, respect for constituted authorities and living a purposeful life through continuous education.

“I was locked up for more than three years, after leading the country. At that point, I realised and I told my children that your net worth is what is in your head, not what you have acquired in life,” Buhari was quoted as saying.

My focus has always been on training the children to be relevant wherever they find themselves. I told my children, particularly the girls, that they can only get married after getting a first degree.

“They already know I am not leaving anything for anyone to inherit. My greatest legacy to the children is to ensure they are properly educated”, he added.

The President noted that the younger children should be guided and taught history, as they would find it hard to be patriotic, responsible and respectful, without a thorough understanding of their backgrounds.

His words: “Whoever does not have a good sense of history will easily make mistakes.

“We should ensure the children get proper education. The knowledge they acquire should not be towards getting government jobs. We don’t have jobs in government anymore. With technology, governments are becoming more smaller, nimble and efficient.

“Emphasis should now be on skills acquisition and competence in creation and deployment of technology. During the COVID-19, we asked all level 12 downward to stay at home, and surprisingly the systems worked effectively.”

The president told the emir that he would be more regular in visits as he prepares to leave office in May 2023, adding that the prolonged absence was due to the demands of his office.

“This is the longest I have been away from home. In fact, the Emir took to the court of public opinion at the prayer ground, when he openly told everyone that I had not visited Daura for close to a year”, he added.

He said all Nigerians must make sacrifices to move the country forward, especially the public servants, calling for more selflessness and inclusion.

“ At the end, it is only God that can reward your efforts, not man”, he said.

In his remarks, Governor Aminu Bello Masari listed the achievements of the President to include social security, which was created to cater for the poor, and ensure that they receive some money at the end of every month.

“No government in the history of this country has done more to reduce poverty like President Buhari’s administration. He asked religious and community leaders to bring enlightenment to bear on successful government programs such as the Social Investment Program, SIP through which 120,000 poor citizens in 12 Local Government Areas of the state receive a monthly payment of N5,000 and this is happening in all the states.

“Today, we have over 863,000 children in the state being fed under the school feeding program. This has created 10,000 jobs for women cooks, 14,000 young men and women enrolled in N-Power.

“We have food vendors who are engaged and earning their livelihood. All the foolish talk on social media is by those who only think of themselves. Our elites are never happy or appreciative until something gets to their pockets”, he said.

Masari said security in the country had improved considerably, compared to when the President came into power, reminding the Daura Emirate Council, title holders, political leaders in the state and citizens across the entire federation to remember the bombings of mosques and churches before 2015 that had hindered worship, problems which explained are no longer with us.

“Human beings forget easily. It is true that we have not reached where we want, but efforts are being made to ameliorate the situation. Look at the size of our security compared to the population, you will know we all have to be involved in securing the country”, he added.

The Emir thanked the President for the infrastructural and institutional developments in the state, saying generations will remember and remain grateful to President Buhari.

Dr Faruk urged the President to increase his patience and tolerance as he begins to countdown, knowing that the ultimate reward for all his sacrifice will come from God.

“All Nigerians, both good and bad, know you are doing your best. In life you will have people who like you, and those who do not like you. If you have many wives, or many children, they will not like you equally.

“Some are insulting you and belittling your efforts now. Don’t worry. They will do the same thing to the next president.

“Keep doing your best, and remain tolerant as a leader. In Daura here, even the blind or the leader of all the blinds know that you have made a great difference. We are grateful, and proud of you”, the Emir said.