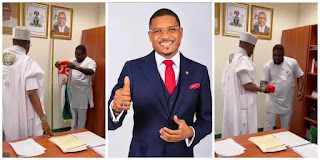 A member of the House of Representatives Shina Pellerhas removed the All Progressives Congress (APC) Flag from his office.

This comes a few weeks after the Lawmaker dumped APC for Accord Party after failing to grab the party’s senatorial ticket for Oyo North.

A video shared on his Instagram page on Monday captured an aide to the lawmaker removing the APC flag in his office.

Shina Peller appreciated APC for the life experience adding it was time for a fresh beginning.

He wrote: “There is time for everything. Big thanks to APC for the life experience. It’s time for a fresh beginning. We move. One Accord. ACCORDing to the interest of my people. One ACCORD”

Naija News recalls Peller, on Tuesday 21st June 2022, disclosed he has moved to the Accord Party while announcing his resignation from the APC on the floor of the House of Representatives during plenary.

He said: “After my exit from the APC, we engaged other political parties, we had numerous options, but we opted for Accord for very peculiar reasons.”

According to him, Accord Party “happens to be the first party in Oyo State to zone Oyo North Senatorial ticket to Oke Ogun considering that Ogbomosho Zone had done two terms.

“The party has shown an unwavering commitment to the yearnings of the people of Oke-Ogun. It has given us hope and a sense of belonging.”

Peller stated that Accord Party’s internal democracy mechanism is intact, a component lacking in other parties.