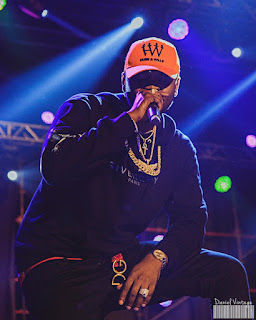 Kizz Daniel, an award-winning artiste from Nigeria, has earned himself a lot of criticism

after he showed up for his show late.

According to fans, Kizz Daniel, who is currently on a tour of ten cities in U.S., was four hours late for his show last night and only performed for few minutes.

Fans have now taken to social media to criticize the talented artiste for lack of attitude.

@Engr_Series said: “Kizz Daniel was 4 hours late to his show in USA only to perform for about 30 mins and the crowd weren’t having it. Papers & cups were thrown on the stage as they screamed “refund”. Very typical of Nigerian artists when they have shows at home and as they say ‘charity begins at home’.”

@AfroVII wrote: “Man’s a lazy AF performer. He can sing, he can write but don’t pay to see Kizz Daniel. Don’t. He doesn’t care if you have a good time or not. He’s been like that since his second single blew.

Oh well, my people say, the stubborn fly always follows the corpse into the ground.

There’s no way to help anyone bent on self-destructing.”

@Vyruzz Beatz: “You’d think everyone is against this Kizz Daniel guy but then it seems he has always been against himself with lots of shitty traits.”

Iseun Ife said: “Kizz Daniel is a talented artiste but that professional touch is somewhat missing.

He’s blessed, but I feel that’s what’s missing for him to attain his full potential as an artiste.”

@therealdaddymo1 wrote: “Kizz Daniel is super talented that’s a fact but this right here is some serious unprofessionalism and a terrible attitude by the artist and his team. Maybe they need to check their history and see how artists before them took shows and performances seriously.”

Another thread from Yinka @Fomasoul reads