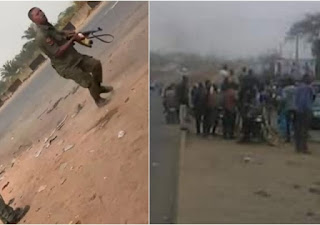 There was palpable tension in Ogun State on Thursday, when security personnel allegedly

The SS2 student student of Unity High School in Ago Ika area of Abeokuta, was reportedly hit by a stray bullet when security operatives attached to the state special security outfits, OP MESA, were chasing suspected internet fraudsters aka Yahoo Boys.

According to reports Sadiat, who is an only child, was shot while she and her colleagues were walking out of the school premises.

A bullet fired by the security operatives while chasing the suspected internet fraudsters, mistakenly hit 17-year-old girl in the head, according to Daily Trust.

The girl was thereafter rushed to the Federal Medical Center (FMC), Idi-Aba, Abeokuta, where she was later pronounced dead.

Police Public Relations Officer, Abimbola Oyeyemi, confirmed the incident, but added that he was not aware of the death of any student.