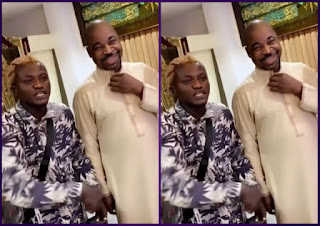 Musiliu Akinsanya, popularly known as MC Oluomo, amidst the backlash of ‘one million boys.’

now deleted that he was the founding father of the cult group ‘one million boys’ which triggered threats.

A video that found its way to the internet captured the moment MC Oluomo warned Lagosians against stopping Portable’s access to any part of the state.

MC Oluomo claimed he is the one in charge of Lagos state by mentioning some parts of the state, which include Agege, Oshodi, Lekki, Iyana Ipaja, among others.

Portable, who was present during the video session, expressed joy and happiness for the freedom of movement he gained from the NURTW boss.

Nigerians who reacted to this development claimed the singer would soon misbehave as that is his norm and character.

Days back Portable landed himself in trouble with the police when he claimed that he was the one who formed the infamous Ajah boys and one million boys in Lagos state.

The ‘Zazuu’ crooner generated angry reactions from Nigerians who called him out for his brutal behaviour and unbridled tongue that would lead him to jail.

While trying to retrace his steps, Portable denied his earlier statement, which was captured in a video, where he emphatically claimed he created the infamous one million boys.

He wrote: This has come to an end that I have to voice out… please everyone I wana let you know that I didn’t meant to campaign for APC it was a show they told that am going to before I saw myself in APC office and as a man no need to worry I gats to do the job since it involved money. And what I meant by 1million boys is meant 1million followers. People are threatening my life ooo you should all look into this

I GO BY THE NAME PORTABLE OMOLALOMI, I DO MUSIC FOR LIVING