{PHOTO} “I have been going through a lot medically” Nollywood Itele 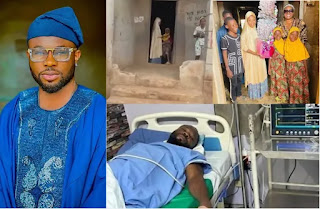 Nollywood actor, Ibrahim Yekini better known as Itele has humbled himself to apologise after

the heavy backlash he received for abandoning his kids.

For days now, the actor has been in the news for the way he has been treating his second wife and her four kids.

Kemi Filani news reported that Itele had come under fire hours after the house where his second wife and four kids live surfaced online.

Gistlover, who had been calling out the actor for abandoning his family, stormed the one-room apartment where his wife and kids live to shower them with love and gifts.

Together with Royal hugs, his wife was gifted thousands of nairas to take care of her children.

Sharing photos online, many couldn’t believe that the family of the popular and rich actor were living in shabbily. Read more here.

Venting out their anger, Nigerians dragged him for mistreating his family.

Since the new broke out, the President Kuti actor has been mercilessly dragged online.

Speaking through his management, Itele pleaded with Gistlover to forgive him as he promised to change.

He claimed in a leaked chat that he has been going through alot medically which could have eaten up his finances.

According to him, he has been running different tests for the pass 3 months which had drained him.

His management begged the blog and promised to change.

Gistlover stated that the actor was weeping when he spoke to the blog, he promised to send a receipt of the monthly allowance he would be giving them and he would also get better accomodation for them.

“Hello tueh tueh, GLB Nation ejor please let’s share the cane for now. Good news guys, I am happy with the new development now, Itele reached out and his team, I felt weak seeing a grown man crying, he explained that he takes his blames and he is ready to change. He also promised to send them enough money every month and send us receipt, he also said he will look into their accommodation issue that recently he is been seriously sick and he was just posting pictures so people won’t know he is sick and going through a lot but as it is right now he is loosing it, he is depressed, I stood my ground that once he send money this month, he should send me receipt because I will need to post publicly, when he no do, na publicly we cane am, when he do too we will post publicly and hail him, he pleaded we shouldn’t post his voice because he was seriously crying, some of his teams members also reached out, will post some of the receipt of his team that reached out, we are so glad he is ready to take responsibility of those kids now and most importantly take his prick, check next post for more”.