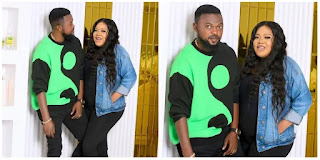 Nollywood actress Toyin Abraham and her husband Kolawole Ajeyemi have expressed love for each other on social media amidst speculation of experiencing a crisis in their marriage.

On Thursday night, an anonymous Instagram blogger alleged that Kolawole was complaining about some of the disturbing behaviours of his wife, Toyin.

Amidst the reports, Toyin Abraham took to her Instagram page to share a lovely photo of herself, wishing her fans a happy new month.

She wrote: “I wish you a month of Happiness, Success, Peace, Prosperity, Good Health, and Wealth. May this new month bring you more joy, gladness, laughter and fun than ever before, Happy new month.”

He wrote: Ayomi (which is translated as my joy).

Toyin Abraham responded to her husband with love emoji too and wrote: Oko mi (My husband).

ONIKEWIDE earlier reported that Toyin’s management in a post on Instagram described the alleged marriage crisis as ‘untrue’.

The statement disclosed that Toyin only sleeps outside her matrimonial home when she’s on location or outside Lagos for a job.

It added that Toyin and her husband, Kolawole always holiday together both within and outside Nigeria and the reports are only lies to achieve self-interest.