UPDATE - Ekwerenmadu, wife to remain in custody till August 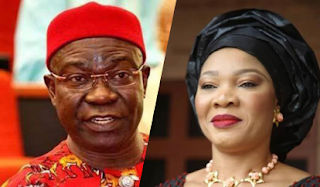 wife, Beatrice till August 4, for continuation of hearing.

The Ekwerenmadus are standing trial over allegations of human trafficking an proposed organ harvesting.

On Thursday, lawyers to the defendants successfully argued that the alleged victim, David Ukpo, is not a minor as previously claimed.

The British court heard that the alleged victim lied about his age but the prosecution insisted that he is a minor.

The court, however, ruled that the victim is not a minor before adjourning the matter till early August.

Last month, British authorities had arrested the couple over human trafficking and organ harvesting. The authorities alleged that they trafficked the victim to harvest his organs for their ailing child, Sonia, who allegedly suffers from kidney failure.

Following their arrest, lawyers from the Nigerian High Commission in the United Kingdom were engaged to provide legal representation, and the Senate Committee on Foreign Affairs delegation was sent to the Ekeweremadus.

On Wednesday, The Federal High Court in Abuja ordered the National Identity Management Commission (NIMC) to send the Certified True Copy (CTC) of the biodata information of the alleged minor to the Attorney General of the Federation for further transmission to the UK to aid Mr Ekweremadu’s trial.