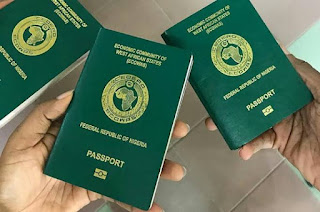 Nigeria has moved up three places as its passport is ranked 100th out of 116 countries, but it is still among the least powerful in Africa, the latest 2022 Henley Passport Index shows.

The index, published by Henley & Partners, a London-based global citizenship and residence advisory firm, ranks 199 passports based on the number of destinations their holders can access without a prior visa.

It is updated in real-time throughout the year as and when visa policy changes come into effect.

The Nigerian passport, according to the index, only guarantees visa-free access to 46 countries of the world. But despite the improvement, the country still ranked amongst the top 10 African countries with the least powerful passports.

Globally, Japan’s passport is ranked as the most powerful in the world as it allows a holder to enter 193 countries around the world.

In Africa, Seychelles’ passport is ranked number one and 28th in the world. Its passport holders have access to 153 countries without visa payment.

Botswana is ranked fourth in Africa and rated 65 all over the world with access to 87 countries without paying for a visa.

Namibia is ranked 76th in the global ranking and fifth in Africa. Its passport carriers have access to 79 countries.

The African countries with the least powerful passports are Somalia, Libya, Sudan, Democratic Republic of the Congo and South Sudan.

Stephen Klimczuk-Massion, Quondam Fellow of Oxford University’s Saïd Business School said it is an understatement to say that we are living through a particularly turbulent time worldwide, with the pandemic still casting a long shadow and newer developments such as war, inflation, political instability and incidents of violence increasingly dominating the headlines.

“In this context, a passport is more than ever a calling card, which, depending on which passport you carry and where you are going, will have an impact on the kind of welcome you will receive where you can go, and how safe you will be when you get there,” Klimczuk-Massion said.

He also added that the relative strength or weakness of a particular national passport directly affects the quality of life for the passport holder and may even be a matter of life and death in some circumstances.