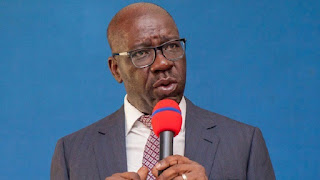 The Governor of Edo State, Godwin Obaseki, has said that the victory of Senator

Ademola Adeleke in the Osun State governorship election is a sign the Peoples Democratic Party (PDP) can take on the All Progressives Congress in the national elections next year.

Obaseki disclosed this in an interview with journalists on Sunday after the Independent National Elections Commission declared Adeleke the winner of the Osun State gubernatorial election.

Adeleke defeated the incumbent governor, Adegboyega Oyetola of the APC in a keenly contested election over the weekend.

Godwin Obaseki hinted that the victory shows PDP is on a rebound, and most of its members who had issues or challenges as a result of the convention will now see that PDP is still the party to beat.

News continues after this ad

He said, “We are strong and ready to take on the opposition and win the elections next year. We should see a lot of our members coming back to the fold, and we also believe that others who have been looking in and wanting to join us, now have a reason to return,” he added.

Also speaking to the media after Adeleke’s victory, former governor of Kwara State and former Senate President, Bukola Saraki said that the victory in Osun State would be replicated across the country in the 2023 general elections.

“The message is clear, Nigerians have spoken. They are tired of the APC party, they are tired of governments that do not perform. They want passionate leaders or leaders that care for them. That’s a clear message here, And that message is going to represent across the entire country, not only in the Southwest. The country is ready to go back to those better days. Nigerians want a better Nigeria and that’s what they have done here,” Saraki said.

In case you missed it