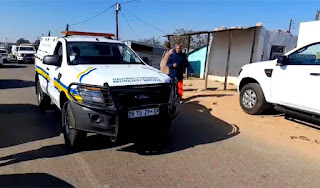 to 20 on Tuesday after another victim died in hospital, a police source disclosed this to local media.

The latest death emerged following a shooting at a bar in Soweto township near Johannesburg early on Sunday, taking the toll of that incident to 16 victims.

Another four people died at a pub in the eastern city of Pietermaritzburg in KwaZulu-Natal province after two men shot indiscriminately at customers on Saturday.

According to Barron’s, sources, however, revealed that police have arrested two people in connection with the incident.

Investigators are working to establish a motive and arrest the perpetrators of the Soweto shooting, police said in a statement.

The media said shootings are common in South Africa, which has one of the world’s highest murder rates, fuelled by gang violence and alcohol.

Some reports said 23 people were shot in the establishment, while 12 died at the scene and 11 were rushed to a nearby hospital with injuries.

“ It’s a bad scene. When you see the bodies [that] are piled up, you can see that every one of those people [was] struggling to get out of the tavern,” Gauteng Police Commissioner Elias Mawela told South African news channel ENCA.

Mawela said the police are yet to determine details on the motive or why the people at the tavern were targeted.“I have no doubt that with the cooperation of the community here, we will be able to crack this case,” he added.

In a separate shooting incident in a bar in Sweetwaters in Pietermaritzburg on Saturday evening, four other people were also killed, police said Sunday.

South African President Cyril Ramaphosa has expressed his condolences to the families of those killed in both attacks and also condemned the incident according to a statement from his office on Sunday.

“As a nation, we cannot allow violent criminals to terrorise us in this way, regardless of where such incidents may occur”, Ramaphosa said.

“As government, citizens and structures of civil society we must all work together even more closely to improve social and economic conditions in communities, reduce violent crime and stamp out the illicit circulation of firearms.”

“Every single violent death is unacceptable and worrying, and killings on the scale we have seen in Soweto, Pietermaritzburg and previously Khayelitsha must spur us into a collective effort to build communities and make South Africa an unsafe place for criminals,” he said.