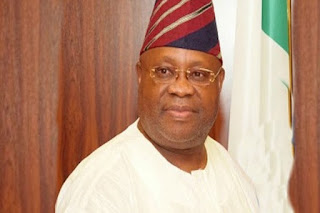 in a different way.

The Governor-elect also dedicated his victory to his late brother, Isiaka Adeleke and the people of Osun.

In his acceptance speech, Adeleke commended the people for the determination to ensure their votes counted.

He thanked them for their impressive turnout and overwhelming support they gave him and the Peoples’ Democratic Party (PDP) in Osun State.

The statement, signed by Adeleke reads:“I commend men and women of goodwill, the young and the old. I am overwhelmed by your love and support. Our state has turned a new page. We have launched a landmark path for progress and prosperity of our people.

“It is therefore with strong faith in God and trust in our people that I accept my election as the Governor of Osun state. I pledge my total commitment to the best interest of the state and her people.

“ I dedicate this victory to my Late Brother, H.E Sen Isiaka Adetunji Adeleke and every indigene of Osun State, and to all my supporters and friends. Thanks and God bless,” he concluded.