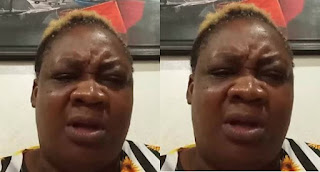 Nigerian comedienne and actress, Princess whose real name is Damilola Adekoya in a newly

Baba Ijesha was arrested and arraigned before the Ikeja Domestic Violence and S3xual Offences Court in April 2021 after he was caught in an indecent position with a minor on camera.

Princess, whose foster child was the victim in the case, noted that after she decided to take the case up, a bounty was laid on her life and she had death threats.

Justice Taiwo Oluwatoyin found the defendant guilty of two of the six counts against him and sentenced him to jail for 16 years, adding that the sentence are to run concurrently for five years.

Speaking in the video published late Thursday, the comedienne noted that she had earlier regretted speaking out about the case.

When asked if she felt regret, Princess said, “Now, I don’t, but in the first two to three weeks, I did.”

She noted that she felt regret because “they put a bounty on my head. They wanted to kill me.”

Princess added, “Some people that I respected so much, I found out that they were the ones pushing him (Baba Ijesha).”

Listen to her speak.