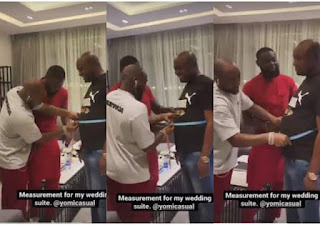 Famous Nigerian singer, Davido and his relationship with his aide, Israel DMW, has once

In a video making the rounds, Davido was seen helping celebrity designer, Yomi Casual, to take Isreal’s measurement for his wedding suit.

It is no longer news that Isreal is getting set to walk down the aisle and Davido has also been involved in the preparations.

In the clip, celebrity designer, Yomi Casual started to take Isreal’s measurement when Davido stepped in and asked to measure his aid as he was in awe of his big belly.

The singer then held the already wrapped tape around Isreal’s waist as he tried to move it up and down the way a tailor would have done.

The singer was also not left out of the measurements. Yomi Casual was seen taking down his body size for his outfit ahead of Isreal’s big day.

The celebrity designer revealed that the measurements were done in the singer’s Banana Island mansion.

Mackprobeatz: “OBO too love this Guy, this pure Love, unconditional Love, some families no get this kin love for themselves Isreal is blessed the name carry grace❤️.”

Fluffydivacakes: “Yeah that he is, borderline free spirited.”