{VIDEO} JJC Skillz reunites with his twins amidst marital crisis 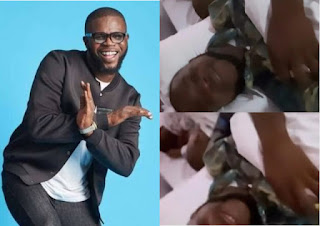 reunited with his twins.

It seemed like the actor hasn’t seen his twins ever since the actress threw him out of the house three months ago.

Though the couple pretended that all was well between them for months, JJC Skillz finally came clean on their marital crisis.

JJC Skillz broke the internet on Thursday, June 30th, when he announced his separation from his wife of over 6yeara, Funke Akindele.

JJC Skills admitted that the marriage had been having issues for two years.

He confirmed that Funke Akindele asked him to leave her house and had refused any form of amicable communication with him.

Deducing from what he said their marriage was now beyond repairs and at the time of making the announcement he was looking at how they can co parent with ease and manage their joint business. Read more here.

It seems the now estranged couple are finding away of co-parenting as JJC Skillz recently visited their Amen house.

In a video posted on his Instagram story, JJC Skillz was seen beaming with smiles as he videod his twin sons, Zion and Zack, sleeping beside him.